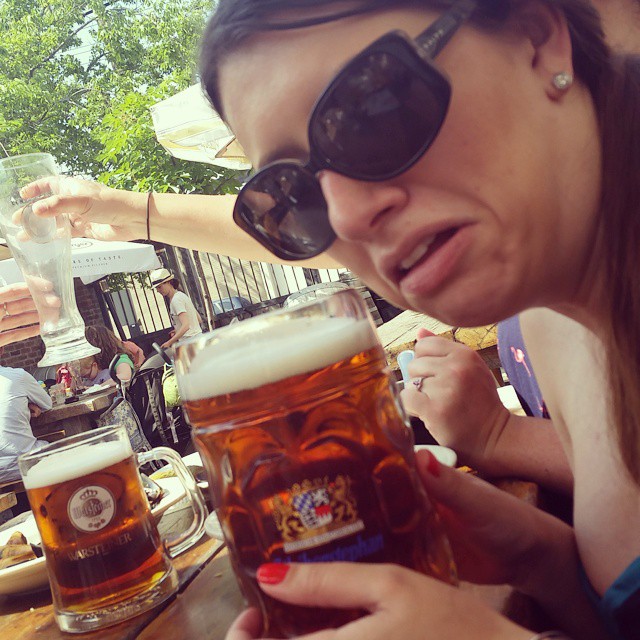 “I remember by first beer, too.”

But actually, I don’t. Do you, really? I was probably… 16? 17? (Sorry, mom!) And I think it was probably the most disgusting thing I had ever tasted. I really preferred hard alcohol at the time… but we drank whatever we could get our hands on back then. By the time college and the first few years post-grad came along, and obtaining beer legally was no longer the issue, affording it was. At bars, I drank whatever was cheap. $3 Miller Lites? That was basically my JAM. Dollar beers at Green Rock? Sure, bring us as many as you can carry. Bud Light was a freakin’ treat. When I lived with my best friends in New Brunswick for a year, we drank swill. Keystone Light, NATTY ICE, and sometimes, even, the champagne of beers.

At this point, I hated the taste of beer. But pre-gaming before the bars needed to be cheap and effective, and you couldn’t play drinking games with wine or booze, so beer it was. The boys even coined a name for how slow I drank my beers, something they lovingly called “Stacy Sips”. It took me about 3x as a long to drink a beer as it did for them, so I’d often have to take some shots before heading to the bars just to catch up. Once I was out of this phase and cared more about my body and health, my beer choices revolved solely around calories and carbohydrates. If I could find a Bud Select 55, sold. If that wasn’t available, I’d take a Miller Genuine Draft 64. Worst case scenario was a Michelob Ultra Light with a solid 95 carbs. These beers were refreshing (because they were basically water) and didn’t kill my fitness goals at the time.

It was probably 2010 or 2011 when I had my first “different” beer. Samuel Adams Cherry Wheat, Magic Hat #9, etc. I was starting to develop a palette for beer and was into trying new stuff. I was still on board with the cheap and/or “diet” beers, but at least I was open to some variety.

As my palette expanded, my disdain for these “other” beers grew and grew. By 2012, Bud Lights at MetLife Stadium actually made me ill. I was into pumpkin beers, every chicks first foray into “craft beer”. Andy and I started dating in 2012, and getting into craft beer was certainly one of our hobbies. Date nights and tailgating gave us great opportunities to try new beers.

We started going to beer dinners: Allagash, Dogfish Head, etc. Then we moved in together and ShopRite Liquors in Little Falls became our hunting ground. Between the two of us, we’ve been to (we think) 11 breweries, with about half being out-of-state, as well as dozens of other beer festivals, microbreweries and brew pubs. We are looking forward to visiting many more, including Yazoo and Bearded Iris in Nashville, Tenn. next week! We’ve also dabbled with home brewing, but have not yet mastered the craft (not even close).

Stay tuned for a recap of our beer journey during our Nashville trip, as well as some reviews of the various local beers we have stashed in our beer fridge!