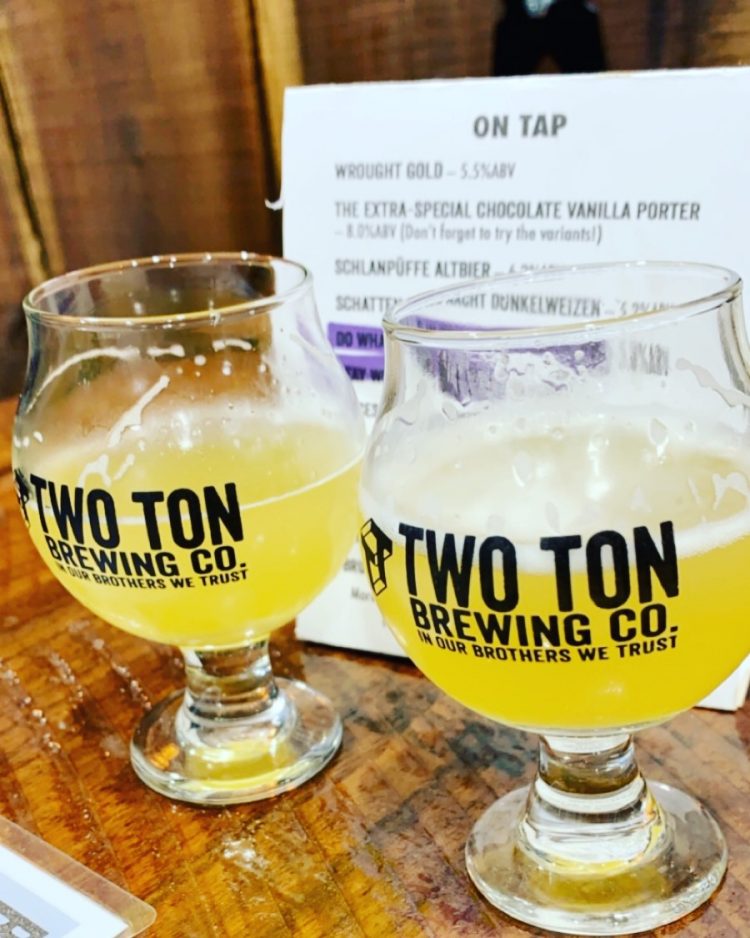 After a long winter of sicknesses and snow, Andy and I decided we needed a date day. Ever since they opened last October, we’ve been wanting to check out Two Ton Brewing. Located in Kenilworth, the brewery is owned by a fellow alumnus of Montclair State, Matt Barbiere (see page 54!).

We first met Matt when he reached out to me in 2015. We were gearing up to host our first ever beer garden at Homecoming. Matt reached out to let me know that he ran an up and coming brewery that shared a space with another brewery that was participating, Climax Brewing, and that he’d love to participate.  Two Ton has been featured at Homecoming  every year since then, with the exception of this past Fall, as he was a little busy opening a brand new location of his own. When I first met Matt, he was getting his MBA, working a full-time job, and starting a brewery. We’ve always been super impressed with his work ethic, and, of course, his beers.

So Andy and I recently (finally) got to spend some time at his new location. Filled with great music, a friendly bartender, and tons of games, the space is welcoming and cozy, which can be hard to do at breweries because of their industrial nature. Before settling in, we decided to order a flight and were welcomed on a quick tour of the brewery. Off the bat, we were impressed with how many beers were on tap and the really cool spaces. We are looking forward to going back on a Friday or Saturday to check out the library, and to enjoying a beer on the patio in the summer!

Here’s a little bit about some of the beers we tried!

Wow, wow, wow! This IPA was fruity, and really juicy. There was no bitterness to this one and it was super drinkable. After we each had a flight, we ordered a pint of whichever we liked best, and this was by far my favorite one of the day.

Classic IPA taste. Juicy, juicy juicy! Citrusy and hoppy in nature. Well-balanced and super duper drinkable. This one came in a very close second place to Myces. I loved the orange flavor and the hoppiness. This is the kind of IPA I could crush a can of at a tailgate or, ya know, a random Wednesday night on the couch! (Start canning, Matt!)

So smooth, so clean, so drinkable. We picked up notes of caramel as a result of the malt flavors. Obviously, this is a German style beer, perfect for Oktoberfest or any beer fest, really. This beer should appeal to the masses and I’d recommend this to someone who likes ales or lagers, since alt biers “look like ales, feature ale yeasts and are hopped like ales, but are fermented at cooler temps like lagers”.

Fun fact: When the US Government was shut down, breweries could not name new beers, so Two Ton just called this beer what it was! Pretty clever, eh? Well, this beer comes off as an IPA, but it’s not! Despite its hoppy and citrusy taste, it’s a berliner weisse for sure. At first, when drinking it, you may think it’s an IPA, but the aftertaste is clean and wheaty.

This was so good, and super unique. Chamomile? Cardamom? Cinnamon? Orange? This may just be one of the coziest non-Christmas beers I’ve ever had! It’s like a warm cup of tea, but instead, it’s a nice cold beer!

For an 8% ABV, this porter is super smooth! This is one of the brewery’s award winners, so you know it’s well-done and the recipe has been honed. Served on nitro, it’s like drinking dessert. Vanilla and cocoa hints pair well with the barley, hops, and vanilla tones. I can see why this particular beer wins awards year after year!

Light and drinkable! Sometimes, you just want a beer – nothing fancy, just a beer! This is that beer. Hops and English ale yeast combine for a beer that isn’t bland or boring, but the perfect one for someone who may claim they “don’t like fancy beers”!

Our date day at Two Ton Brewing was awesome. The beers, the atmosphere, and the company were all great. While we were there, we also got a sneak peek sample of their Sour IPA before it was released. I’ve never really been sure about sour IPAs, but I really enjoyed this one! We ordered lunch, played games, and enjoyed some delicious brews. In addition to these beers, I’ve sampled some of Matt’s other creations at Homecomings, and I’ve never had one I didn’t like! What I love is that nothing is too fancy or pretentious, they’re just well crafted beers that the average beer drinker could enjoy with their beer snob friend.