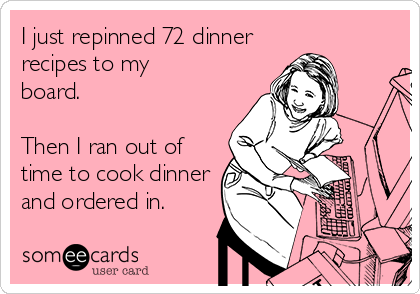 I love to cook. But it can be a real pain in the butt when you’re exhausted at the end of the day. I’ve been addicted to Pinterest for years now, and I have tons of recipes pinned. But I found that I wasn’t ever actually using them. Instead, I was making the same 15-20 things on rotation.

While I was still in graduate school, it was even harder to make real dinners during the week. After graduating, Andy suggested that we re-institute something we had done in the past. Before making the same ole grocery list, let’s peruse my Pinterest boards and pick out some recipes to try.

So, for the past few weeks, we’ve been doing just that. From easy dinners and crock pot recipes (for those not-so-summery and rainy days lately) to side dishes, salads and desserts, we’ve been trying new things 2-3 per week. I thought I’d share some of my favorites with you below, so that you can also me a dinnertime hero. Keep in mind, some of these can be modified for dietary needs!